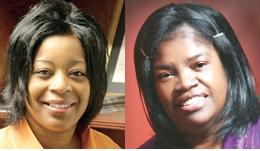 Since the brutal murder of Jackson State University student Natasha Norman in November 2007, there have been numerous crimes and/or police calls relating to domestic violence in some form or another. Among the latest victims is Tracy Collier, who was stabbed 21 times and then run over by a car in her front yard by live-in boyfriend Toriano Holmes.

According to Jackson Police Sgt. Jeffery Scott, just since January of this year, that has been 450 incidents of domestic abuse. “One thing we try to tell the young women is that if a man hits you once, he’s going to do it again,” said Scott. Scott said when they arrest the abuser, after they go to court, generally the woman takes him back in, and the cycle begins again.

Some advocates against domestic violence say it is going to take more action on the part of the faith-based communities to help combat such violence. Two of them will be presenting at a domestic abuse seminar, Saturday, April 26 at the Holy Temple Missionary Baptist Church, 5077 Cabaniss Circle, Jackson. The seminar, scheduled for 9 a.m. until Noon, is free and open to the public.

“Domestic Violence is an important issue that must be addressed in the home, community, schools and churches, especially African American churches,” said Melissa Benford, one of the scheduled key presenters. For the past four years Benford has worked as the Sexual Assault coordinator for Project S.T.A.R.S. (Sisters/Students Taking A Radical Stand). The project is a part of Jackson State University.

“Domestic Violence has been around for a long time and has taken its toll on the black family; it has often times been looked at as a ‘lover’s quarrel’ or a ‘private family issue.’” Benford said.

Perhaps no one knows domestic abuse like Evangelist Voncele Savage, another key presenter. She suffered abuse from her spouse for 33 years. She is a firm advocate that the church needs to address this “issue that plagues society.” “That is the purpose of the church,” stressed Savage. “By loving and reaching out, we can bring healing and fulfill the Great Commission that Christ gave us before He ascended on high (Matthew 28:18-20).

Salvage has authored a book about her ordeal in which she offers solutions. It is called “A Letter to My Sisters: A Way Out.”

Savage said the church’s first step is to recognize the problem (sin). “We can no longer sweep certain sins under the rug or ignore them,” she said. “They will not go away. They just compound.”

The event is coordinated by the church’s Women of Praise (WOP) Ministry. “The seminar is open to men and women, and the entire family,” said Rev. Audrey L. Hall, pastor of the West Jackson church. “However, we want the public to know that there will be some graphic materials,” she said. Hall explained that the seminar is part of the church’s outreach ministry goals. “We want to help equip the community with knowledge about the issues that are out there and offer solutions,” she said.

“We are either part of the solution or we are part of the problem. Churches, what are you?” asked Benford.

For more information, please contact Women of Praise President Rev. Roxy Walker, one of the church’s ministers at (601) 923-6433.

NOTE:  To comment on this article, please remember to stoll down and complete the Image Verification box before posting your comment.