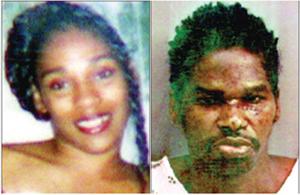 Once again domestic violence has struck a Jackson neighborhood, leaving be-hind the death of a 33 year-old Jackson woman and six grief-stricken children, relatives, neighbors and friends.

According to reports, Tracy Collier of 2804 Brookside Drive, was stabbed repeatedly. Stab wounds were found in her head, face, chest and stomach, according to authorities.

The coroners believed that she tried to defend herself against the assailant. Not only was she stabbed, Collier was also run over by a car in her own front yard, where she died.

“I don’t think any person should have to go through something like this,” said Thalmadge Edwards, Collier’s cousin. Fighting back his emotions, Edwards further stated, “She didn’t deserve this.”

According to comments from Jackson Police Sgt. Jeffery Scott, “It appears that her death was the result of a domestic dispute.”

Edwards, who is also a minister, stressed that people must put prayer and God first in any relationship. “We really should be doing something to get a handle on this domestic violence,” he said. “It’s so hard right now.”

According to figures from the Family Violence Prevention Fund (FVPF), the existence of domestic violence estimates range from 960,000 incidents of violence against a current or former spouse, boyfriend, or girlfriend per year to three million women who are physically abused by their husband or boyfriend per year.

Just how do communities get a handle on such a growing problem?

“We, the church have to step up and play a better role in helping to prevent domestic violence,” said Rev. Audrey Lynne Hall, pastor of Holy Temple Missionary Baptist Church. “We, as pastors and members, must learn to recognize the tell tail signs of abuse,” she said. She said prayer is the key – pray that victims of such abuse will gain more self-esteem.

Evangelist Voncele Savage, a delivered victim from 33 years of domestic violence, concurred. “Learn to love God first – more than any human being – then love self and others,” she said. The evangelist is the author of a book entitled, “A Letter to My Sisters: A Way Out.” “We have to be led by the Holy Spirit. You have to value yourself.”

No one wants their loved one to become a statistic, but Collier’s death is part of a national average that states, “more than three women are murdered by their husbands or boyfriends every day,” according to FVPF.

Officials arrested suspect, Toriano Holmes, also 33, her live-in boyfriend and the father of several of her children.

“God did not put us here to be abused,” said Evangelist Savage.

She will be a key presenter during a domestic violence seminar at Holy Temple on Saturday, April 26 from 9 a.m. until Noon, sponsored by the Women of Praise Ministry (WOP). The theme is “Healing the Broken-hearted,” (Psalm 147:3). The event is free and open to the public.

Contact Rev. Roxy Walker, WOP president, at (601) 923-6433 for seminar information. For more information about Evangelist Savage and her book on domestic abuse, visit www.savagehouse.net or you may email her at vancelekirkwood@bellsouth.net.