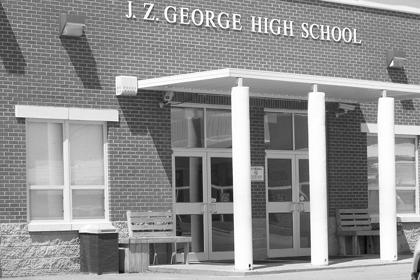 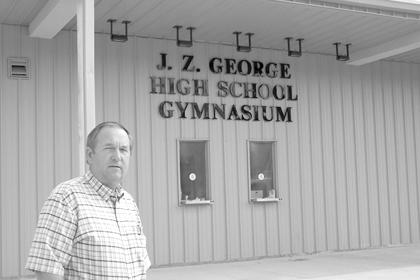 In years past, the Carroll County Public School System had been plagued with misfortune. In 2007, one of their most promising alumni, Rodney Lockhart, an Ole Miss track star, was shot and killed as he slept in his Oxford apartment.

Two months earlier, another student, 16-year old DeMarcus Liddell was shot and killed just steps away from Marshall Elementary, the school he once attended. And for nearly a year, three school board members threatened to close the county’s most successful school, Hathorn Elementary, due in part to budget cuts.

But school superintendent Billy Joe Ferguson was always hopeful. He wanted more for Carroll County’s students and each year he worked to bring in new programs, new opportunities, new teachers and his biggest project to date – a new gym for J.Z. George High School in North Carrollton.

J.Z. George, which consolidated with Vaiden High in 1999, was one of few schools in the state without their own gymnasium. And Ferguson fought to change that – but not without bitter opposition. But in 2006, after what seemed to be a long, hard battle, a new multi-million dollar state-of-the-art facility was complete.

“Having no gym was like playing on the road for us most of the time,” said retired Coach Claude Elam. “But we had some real good kids in all the sports that we had and they were dedicated. And they wanted to be part of a winning team.”

Elam, who retired in May 2007, was a coach at J.Z. George for 30 years, and said George was a first rate school athletically.

“George was mainly a football school,” he said. “And before we even went to state we had several undefeated seasons. The first year we went to the playoffs was around 1980-81 and we won the Double B Football Championships in 1982.”

Since then, J.Z. George has won the state championships in girls and boys track. The girls’ softball team has competed in the North State Playoffs every year and the new girls’ and boys’ weightlifting teams have taken home top awards.

But as part of an incentive to further motivate Carroll County’s nearly 1,000 students, the school board approved a new music program for the 2007-2008 school year under the direction of Lane Thompson.

In his initial presentation to the Carroll County School Board in 2007, Thompson linked academic and future success with music appreciation. He told the board that music was “cross disciplinary.”

“Music is a foreign language,” he said. “It’s math, science, history, literature, physical education and art. We can go right down the list and combine all of those things together, musically, and we help our students to relate to other subject matters.”

Initially, the music program was established at J.Z. George High School and Marshall Elementary, both in North Carrollton. But Thompson said the program will extend to Hathorn Elementary in Vaiden for the 2008-2009 school year.

“We didn’t know things were going to go as well as they did,” Thompson said. “So we postponed Hathorn for the first year. But they will have a beginning band in the fall. And so no one will be left out, the students who leave Hathorn Elementary this year, will enroll at J.Z. George and they can join the band when they come here.”

Thompson, who graduated from Ole Miss, said the music program has been a positive force for the students at J.Z. George that have struggled through low test scores, economic hardship and significant drop out rates.

“They love it,” he said. “They love the idea of belonging to something in the school and this is something new and different. We’ve seen a lot of what we call “at risk” students join the band and have a complete turnaround. Those who were failing and were below average are now doing good because they have something to work for.”

Thompson further said once a student joins the music program, there are certain requirements to stay within the program.

“My expectations for this band are extremely high,” he said. “They have to hold a certain grade point average. There’s a certain type of behavior they have to maintain in school. There are rules and regulations for the band members and they can be removed if they fail to live up to any of those areas.”

“There’s much more to music than just the notes,” he said. “But the real challenge is to take all those things you’ve learned and put them all together at the same time. So we spent a great amount of time focusing on the fundamentals and then we moved beyond that and actually played the music.”

While the band won’t be ready for a public appearance for at least two years, Thompson said the students are learning to play in a concert setting and next year they will classify as a junior high band. By the end of the process, Carroll County will have two beginner bands, one at Hathorn and another at Marshall Elementary, a junior high band and a high school band, both at J.Z. George – all firsts for Carroll County.

“We’re exploring the music together,” Thompson said. “And it’s good to have a band in a small community. It’s good for the community. It helps to raise interest in the schools in a positive image and also teaches our children building skills so they can learn to be successful adults.”