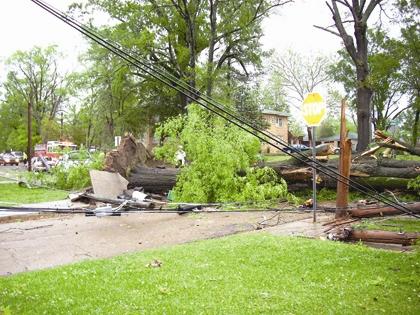 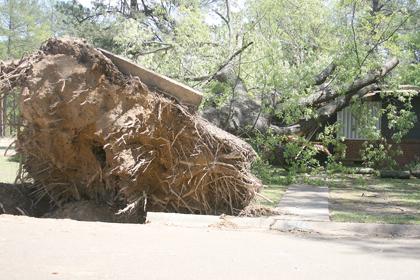 On the other side of town, residents of West Jackson had plenty to tell.

“It happened so quick, you really didn’t have time to feel anything.

“As I was going out the door, the weather changed. I wasn’t really scared, I was mystified of how quickly it came up,” described homeowner Herman McQuiter.

McQuiter was sent home on Remembrance Road earlier than usual from his job Friday because the storm was on the way. He was at home with his son when the E-F2 tornado whipped across central Mississippi. His son was getting ready to head out to work at the Baptist Medical Center in Jackson.

“He had to be at work at 12:30 at Baptist Hospital … a little chill came in the air, and then the sky turned black. The wind snapped the tree across the street from my house, “McQuiter explained.

The National Weather Service said standing rain and hail drenched the state. “It didn’t last very long. It went from one extreme to the other. The wind just snapped that tree and it just fell on that line and everything went out,” he described.

“In about 10 or 15 minutes it was all over. But it was devastating. It tore down a lot of limbs and a lot of trees,” said McQuiter.

McQuiter said he and his family are thankful. Storm damage is all too familiar after his wife, children and grandchildren were displaced when their home burned down shortly after Hurricane Katrina hit.

The McQuiters were living in south Jackson on Hines Street three years ago before Hurricane Katrina.

“We lost our home. A candle tipped over while the power was out, and burned the house to the ground,” McQuiter said.

“We are a strong black family. It takes a lot to get us down,” McQuiter said. He said neighbors pitched in to help each other. Unlike many of his neighbors, his house was not damaged. “We were lucky, we were lucky. Nobody got hurt. “

“This time around, I just sat and waited and thought the lights would come back on that night,” said McQuitter.

He power was restored at his home Monday night.

“I went out to my car to get something to drink, some juice, and that’s when the sirens went off,” recalled New Jerusalem Christian School Director Rosalyn Cheeks-Walters. One side of the daycare held dozens of infants. The other side is where three and four year olds slept.

“After I heard the sirens, I ran back inside and told the teachers to get everyone into the hallway,” she said.

Eleven teachers had minutes to react and get more than 75 babies, toddlers and young children into the hallway.

Cheeks-Walters has been the director at the Old Canton Road location for one year. When we moved into the hallway, Cheeks-Walters said the power failed immediately after the first hard wind blew.

“The three and four year olds did good. A few of them asked about their parents. We do tornado and fire drills so they were very aware and prepared. My biggest thing was to make sure everyone’s children were taken care of. I had children of my own at the center.”

Cheeks-Walters has a three month old and a four year old. “They wasn’t really on my mind. I was just making sure everyone else’s kids were okay.” The power was turned back on Sunday night around 9:45 p.m.

Neighbors and tree removal crews on Lake Trace Circle spent Monday cleaning. They said they wanted to hurry up and return to a sense of normalcy.

Charles and Ruth Claybrook lived in their North Jackson home for nearly 20 years. Since the storms, they can now stand outside where their front bedroom used to be.

“This is the front tree, this is where the tree fell and hit the house, right there,” said Charles Claybrook as he pointed to a roofless shell of a room. They were standing in the hallway of their one-story house just inches away from where strong winds demolished two rooms inside their house.

A 20-foot pile of wood and debris sat just feet away from their home. Inside that pile is our bed, chairs, a desk, our closet, and clothes. “I can’t believe my prized possessions are gone,” whimpered Ruth Claybrook.

Included in those possessions was her engagement ring that goes with the wedding band on her finger. She had placed it on a night stand beside her bed before the storm came through.

She said she is still in disbelief. “We were standing next to the door that we had just closed when the tree came and the winds blew,” Ruth Claybrook described.

Like thousands of other Mississippians, they’ve been without power since Friday. However, electricity was not the only concern for the Claybrooks, they also had to throw out a trash load of groceries.

“We are so blessed to be here and the next time that he hears a siren, he will go to the hall, I’m sure, he didn’t do that initially; he will from now on,” said Ruth Claybrook as she wiped away her tear.

The couple is waiting to meet with their insurance agent to assess the damages. The Claybrooks are staying with a neighbor until a portion of their house is rebuilt.

Sonia Cross of Brandon said all of a sudden things looked like a scene from the the movie, “Twister,” as she traveled south on Old Fannin Road Friday. “I was headed to Trustmark and my mom was on the phone telling me I should go back home because of the bad weather,” she said.

She said as she approached the front of Bridalwood Subdivision, a fierce gust of wind and trees started coming toward her like darts. She said she found herself dodging trees just like in the movie. “Everything was so gusty,” she expressed. “I looked up and I saw something like a funnel cloud, and I turned my truck around in the middle of Old Fannin Road. As I am dodging trees, I pulled over into Bridalwood, and there was a young lady in a car with the window down on the phone just yelling and crying, ‘I don’t know what to do.’ I asked her did she live around here? She said, ‘No.’ I told her come on we got to find somebody’s house to take cover.”

Cross said she motioned for the young lady to follow her. She drove through the subdivision with the young lady trailing in her car. Cross went around a big old tree that had fallen and so did the young lady. “I pulled into this drive way and jumped out, told her to come on.”

Cross, a local loan officer, said she told the women at door, “Ma’am, I know you don’t know us, but I’m a good person and I’m sure she is, too. We just need to take cover somewhere until this storm passes.” The senior citizen allowed them in. Cross said it appeared that the woman did not have a clue as to what was going on outside until they arrived. “We stayed in her home for about 10 minutes,” Cross said. “The young lady with me sat there very nervously, and the woman did not want us to leave when we did. They told the woman how much they really thanked her for letting them in.

“It was nothing but God that saved us,” said Cross. She said it was amazing how she never really got scared. “I was trusting in the Lord.” When asked if she, the young lady and the woman at the house ever exchanged names, Cross replied, “You know something, we never did.”