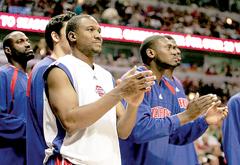 Hunter plays less than 10 minutes a game and averages just 2.1 points. But the 6-2 guard from Jackson State figures prominently in the Detroit Pistons’ plans as they pursue their second NBA championship in four years.

Hunter, who says this is his final season after 15 years in the NBA, is still one of the league’s best on-the-ball defenders. The Pistons will count on his defensive prowess come playoff time when they will likely have to face the likes of Boston’s Rajon Rondo and Ray Allen, Cleveland’s Boobie Gibson and Orlando’s Jameer Nelson.

His quickness enables him to keep smaller guards in front of him and prevent them from penetrating. His long arms and upper body strength allow him to defend taller opponents who might try to post him up.

Hunter, 37, played in only 20 of Detroit’s first 73 games and was inactive from Jan. 11 until March 24. That is in keeping with the Pistons’ strategy to have him fresh and ready for the postseason, which is fine with Hunter even though he acknowledges wanting to play more.

“The great thing about this organization is you have a class guy like Joe Dumars running it,’’ Hunter said. “Joe sits down with me and lets me know exactly what he expects from me. You can’t ask for anything better than that. I know my role. I know what’s expected of me, and I do it to the best of my ability.’’

Hunter’s reliability and willingness to assume a lesser role has allowed the Pistons to play rookies Rodney Stuckey and Arron Afflaflo and accelerate their development. They know that should the youngsters falter, Hunter will be ready to step in.

The Pistons picked Hunter 10th overall in the 1993 draft, touting him as the eventual successor to Isiah Thomas, their All-Star point guard and team captain. That draft class included Chris Webber, Shawn Bradley, Penny Hardaway, Jamal Mashburn, Bobby Hurley and Allan Houston. Hunter is the only player from that class still in the NBA.

“What Lindsey has had is a very long and a very good career,’’ said Dumars, Hunter’s teammate from 1993-99. “He really turned into an excellent pro player. When I say pro player, I mean on and off the court.’’

Dumars said that Hunter, in the right situation, could play beyond this year if he chose to. However, Hunter said he’s not considering returning.

“I’ve got a little left,’’ he said. “But it gets to a point where you realize you’ve done everything. You’ve accomplished a lot. There has to be a life after basketball. I’ve prepared for that. I’m ready to start that second phase of my professional career. I’m excited about it. Of course I’ll miss part of it. But I think it’s time for me.’’

Hunter is a graduate of Jackson State University and a product of Jackson Public Schools. He played ball at Murrah High School under Coach Osmound Jorden.