How To Get Your Ex Boyfriend Back –

Text Your Ex Back

how to get my boyfriend back

How To Get Your Ex Back

How To Get Your Ex Back

ways to get back together with your ex boyfriend

how to get your man back

Winning Back Your Girlfriend

Hot To Get Your Ex To Text You Back Girlfriend Back

How To Gain Trust With Your Girlfriend Via Text

How To Get My Ex Back

how to get your boyfriend to want to be with you

I Text My Ex Boyfriend

how to won love back in texts

winning back your girlfriend

How To Get My Boyfriend Back

text your ex back

how do i win my boyfriend back

No Time For My Ex Girlfriend 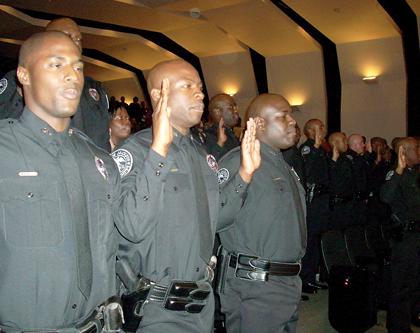 Forty recruits of the 43rd Basic Law Enforcement Training Class took the oath of office and received their diplomas during graduation exercises at the TelCom Center. The ceremony was held there because the training academy could not accommodate the standing-room only crowd.

Police Chief Malcolm McMil-lin, who also dubs as Hinds County Sheriff, said the large crowd can be attributed to “a show of support of this department … support that for a long time has been needed … from this community.” He told the recruits that he graduated from the academy 36 years ago in November.

Laura Mae Williams traveled more than 100 miles from Centerville, Miss. to see her grandson, Lakeith, become a police officer. “He came to get me, but I was going to come even if he hadn’t,” she said.

Numerous members of the class were recognized for various specific awards. The class’ top student is Demetrice Rigsby with an average of 94.99 – including academics, firearm training and physical training. Academic recognitions for others having a 91 or above average went to Michael Everett, Shivon D. Hodges, Christopher Sawyer and of course, Rigsby.

The basic law enforcement training includes 14 weeks of rigorous physical training. Excelling at the top of her class in PT was Angela Harper.

A new recognition this year was the Biggest Loser Certificate, which was awarded to Patrick Smith for losing a total of 55 pounds. Other recruits acknowledged for significant weight loss were Fred Johnson Jr. and Aaron R. Jolly.

Sawyer and Williams were also given special recognition for their assistance as reserved officers during the training class.

The mayor and McMillin both agreed that the recognitions and accolades would not be complete without paying tribute to one who has never been an officer, but has placed his mark on JPD through his untiring and dedicated service. That individual, Sylvester Candler, recruit counselor, is also in charge of building maintenance at the academy. “I would not have made it through the academy if it were not for Mr. Sylvester,” McMillin stressed.

Having served the force for 41 years, Candler said he just tries to encourage the cadets as much as he can. “Sometimes they want to give up,” he said. “After I sit and talk with them and allow them to talk, they eventually realize that they can make it.”

Cadets are away from their families during the training.

According to reports, the recent recruits bring the number of police officers at JPD to 460. The 43rd class was made up of 34 new recruits, five experienced officers from other agencies and one fire recruit, who will go on to be an arson investigator.